During the meeting, the parties discussed a number of issues, including participation of united teams in the 1st Winter Children of Asia Games 2019 in Yuzhno-Sakhalinsk and in the 7th Summer Children of Asia Games 2020 in Ulaanbaatar. Minister of Sport noted that he fully supports the goals and objectives of these projects, aimed not only at developing children's and youth sports, but also in creating friendly, cultural and humanitarian contacts among the younger generations, and in the future Armenia, being although a member of European Olympic Committees, will continue participating in Children of Asia Games. By the way, according to the Concept of the Games, Armenia, along with Azerbaijan, Georgia and Turkey (also members of the EOC), has the right to participate, as it is territorially located in the Asian continent.

After the meeting with the Minister, the delegation presented Children of Asia Games for sports functionaries, judges and athletes of the Republic. The presentation was moderated by Deputy Minister Mr. Gabriel Kazaryan, this event was also attended by the Chef de Mission and representatives of the united team, which officially took part and defended the country's honor first in the 6th Games 2016 in Yakutsk. It should be noted that the team's participation became possible thanks to the well-coordinated work of Armenian Diaspora, which completely covered travel expenses, and the Ministry, which prepared a strong and friendly team. In addition, the Union also successfully organized patronage over the team during the Games in Yakutsk. At the same time, results of the debut participation of the united team of the Republic are quite high - out of 22 young athletes in boxing, kurash, sambo, shooting sport, sports wrestling, khapsagai, chess, rhythmic gymnastics and judo, seven athletes won prizes. It is gratifying that for this contribution the Union was awarded the official gratitude of the Ministry.

As it was noted at the Ministry, although Armenia is always at a worthy level in the world sports arena for summer sports, there is still much work to be done in winter sports. Nevertheless, the united team will participate in the 1st Winter Children of Asia Games at any case. The Committee expresses its hope that participation of the country’s united teams in the Games will become an additional impulse for the development of children's and youth sports and in the foreseeable future the world sports community will hear the names of new Armenian champions and prize-winners of the Summer and Winter Olympics, world and continental championships. 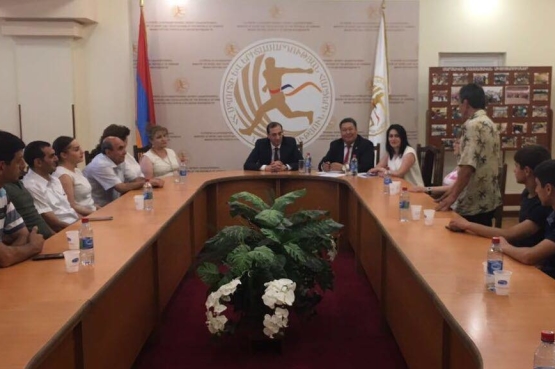