ANOTHER OLYMPIC MEDAL OF CHILDREN OF ASIA

As it is known, the duel ended with the victory of the Russian athlete, who brought the first medal in boxing. This fight was remarkable for the fact that Vasily LEVIT became a champion of the 3rd Children of Asia Games in the weight category up to 80 kg in Yakutsk, 2004.

In addition, yesterday the champion of the 4th Games Vikas KRISHAN, India, entered the ring in the weight category up to 75 kg. He lost to Bektemir MELIKUZIEV from Uzbekistan in the quarterfinal with 0:3.

In 2008 in Yakutsk, the Indian boxer was the best in the weight category of 54 kg. Another hero of Children of Asia-2012 Abylaykhan ZHUSUPOV (Kazakhstan) left the contest after the debut bout.

Today in the weight category up to 56 kg the two old rivals of Aital DYAKONOV, a Yakut boxer will meet in the ring. The first is the second prizewinner of the 5th Children of Asia Games Erdenabat TSENDBAATAR (Mongolia), the other is a two-time winner of the World Junior Championship, champion of the 2014 Youth Olympic Games Shakur STEVENSON (USA). The Mongol was defeated by our boxer four years ago in the final in Yakutsk, the American won the Yakut boxer in the debut bout at the World Championship 2013 in Kiev. Another rival of Aital Carlos BALDERAS, the United States, left the Olympic distance in the quarterfinals.

In 3 days the Olympic carpet will be stepped by five more "graduates" of Children of Asia Games. They are Victor LEBEDEV (Russia), Yan Kuon Il (North Korea), Ayal LAZAREV (Kyrgyzstan), Purevzhavyn UNURBAT and Erdenabat BEKHBAYAR (both from Mongolia), - the Press Center of Ministry of Sports of the Sakha Republic (Yakutia) informs. 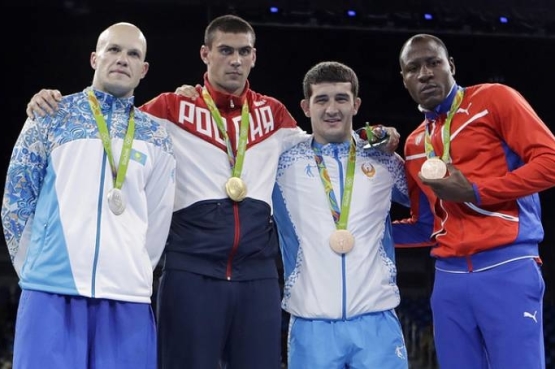