“Mass Theatre Edges” is the main state’s award in the area of theatrical mass performances, which knows no equals neither in Russia nor abroad. It is given to the best theatrical projects and their producers by the results of annual competition for creative achievements in area of mass theatrical art. The award was established in 2005 by Russian theatrical personalities union and Public Relations Committee of Moscow city. Since 2013 The All-Russian public organizations Association “Assembly of Peoples of Russia”, since this year – “Commonwealth of Celebratory Industry Workers” too with the help of the Ministry of Culture of Russian Federation.

In 2016, about 100 different projects from 60 regions of Russia were submitted to the jury of the contest: from Kamchatka to Kaliningrad and from Ukhta to Derbent. Feature of the current competition has become diversity of themes and forms of submitted projects.

The jury recognized the Opening ceremony of the 6th Children of Asia ISG the best in nomination “Best Mass Sports and Entertainment Event”. The Opening Ceremony was held in Tuymada Stadium on 6 June 2016. The author of the event was Ms. Tatiana EGOROVA, Professor of Arctic State institute of Culture and Arts, stage director – Mr. Sergei POTAPOV. 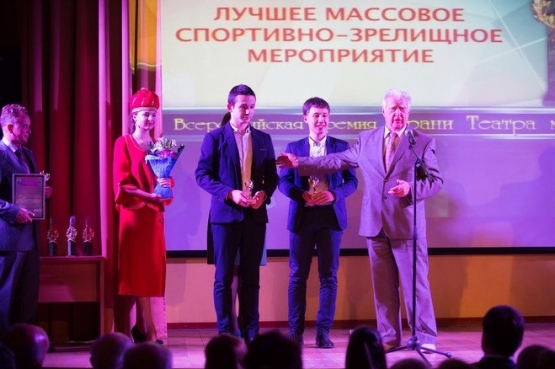